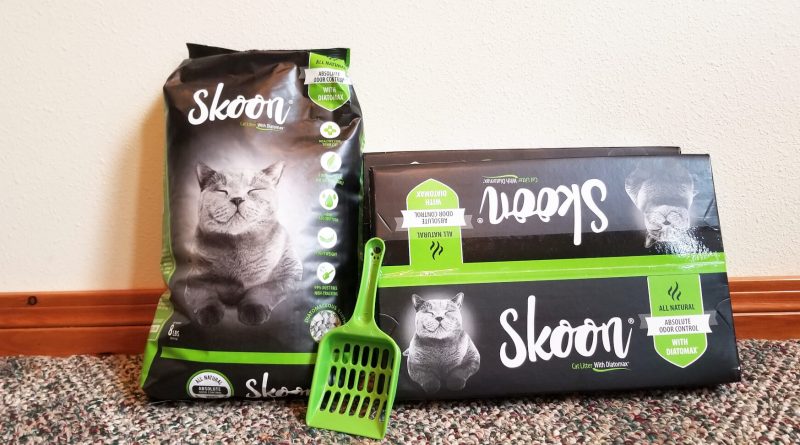 Meet Skoon: the ridiculously absorbent non-clumping litter that’s been all over your Google search results.

Maybe I’m being retargeted as someone who’s looked it up already, but it seems like ads for Skoon cat litter are everywhere lately. And they’re making some big promises.

The ads say Skoon is a scoop-free solution that won’t strain your back, make you cough, or tear up your planet. But since when was any cat litter that good?

In this review, you’re going to get the straight dope on Skoon—and what I’m about to share with you is based on personal experience. Wessie, Forest, and I tried out Skoon cat litter for two weeks. We tested its odor control, absorbency, dust production, paw-feel, and more.

Keep on reading to find out what we thought.

Before we jump into our personal experience with Skoon, let’s get some background on this product.

What is Skoon cat litter?

Skoon is a non-clumping cat litter made from diatomite. Diatomite is naturally-occurring sediment composed of the fossilized exoskeletons of diatoms. It’s the same material that, when broken down into a rough powder, is called diatomaceous earth. Diatomaceous earth is perhaps the form of diatomite with which you’re most familiar—this abrasive flour is popular among cat guardians as a flea killer.

But Skoon isn’t made from diatomaceous earth—it’s made from diatomaceous pebbles. Instead of turning diatomite into flour, the makers of Skoon break it into gravelly chunks. These chunks are then heat-treated. The resulting product is white, chalky pebbles with an internal capillary system that, according to Skoon, soak up liquid like little stony sponges.

Since Skoon locks liquids inside of each pebble, you don’t have to scoop it. But unlike non-clumping clay litter, which you’d have to dump out once a week, Skoon is so absorbent that you can go for up to a month without replacing the box.

Skoon is more than a diatomite litter that soaks up liquids and doesn’t have to be scooped. It’s a litter subscription plan.

Like Pretty Litter and NomNomNow, Skoon is taking a subscription-based approach to sales. Instead of going to the store and buying a bag when you’re ready, you’ll sign up for a monthly supply and wait for Skoon to send you your regular shipment of litter.

And as if all that wasn’t unusual enough, there are two ways to do Skoon. Box or bag.

When you set up your Skoon subscription, you’ll choose to receive either disposable litter boxes or bags of the litter. If you order the boxes, you’ll use the storage boxes as litter boxes. These cardboard boxes pop up and work just like any other litter box for about two weeks. Once you’re done with the litter, you’ll just fold down the sides and toss out the box.

Disclosure: “Wildernesscat received this product for free in exchange for an honest review. Although the product was gratis, all opinions in this review remain my own and I was in no way influenced by the company.”

The cat litter market is blooming with new products. From coconut to cassava to zeolite to seaweed and tofu, there’s a cat litter made from almost anything with the ability to soak up liquids. After spending so much time with the newest products in the cat industry, we’re used to seeing wacky types of cat litter.

Though it wasn’t a surprise to learn that this company was making a litter from diatomite, it was exciting.

I replied to the email saying that we were interested and sent over our mailing address. Shortly thereafter, a big box arrived at the door. We received two 4-lb boxes and one 8-lb bag of Skoon, adding up to a 2-month supply for one cat or a one-month supply for our two kitties.

When I opened up the box of Skoon, I got a closer look at the litter. It was composed of large, chunky pebbles that looked a bit like crumbled feta cheese or coarse, chalky gravel. We know that most cats prefer smaller litter granules—some even say it’s best to aim for the consistency of sand—but we were willing to give these chunks a chance.

What did the cats think of Skoon cat litter?

As soon as I saw the boxes, I suspected that they’d be too small for our larger cat, Wessie. They measure 15” long x 9.75” wide x 5.75” deep, which is significantly smaller than our trusty stainless steel behemoth.

To test which litter box the cats preferred, I put the small Skoon box next to the larger box. As per Skoon’s recommendations, I left the regular box unclean to encourage the kitties to opt for the newer, cleaner box.

About ten minutes after putting the Skoon litter box down, I caught Forest using it. Compared to Wessie, she’s more particular about cleanliness, so I wasn’t surprised that she opted for the newer, cleaner litter. Wessie wouldn’t use the Skoon until we poured it from the bag into the larger stainless steel box. After that, he was happy to use the Skoon. Both of the cats seemed comfortable with the Skoon cat litter.

Is Skoon safe for cats?

Skoon cat litter appears to be safe for cats. It’s an all-natural product made without added fragrances or dyes that could harm your cat. Skoon has been subjected to toxicity testing and confirmed safe by a third-party lab.

How absorbent is Skoon cat litter?

Seconds after the cats used it, I could both see and hear the Skoon working. It made a sizzling, fizzy noise like a bunch of Pop Rocks on your tongue. The urine was quickly disappearing into the white pebbles.

We’ve tried a lot of cat litter, but this was the first one that sizzled—it sounded like Pop Rocks on your tongue.

After 10 minutes, half of the liquid had disappeared.

Skoon was incredibly absorbent. So absorbent, in fact, that I couldn’t tell if the cats were using the litter box or not after the first day. I’d heard them scratching around in there, but there was no visible evidence in the litter box.

Just as it absorbs liquid, Skoon cat litter is excellent at absorbing and neutralizing odors. We didn’t notice any significant odor until two weeks had passed. If we had only one cat, it would have lasted for about a month. That’s impressive.

The cat litter scattered out of the box a bit and I noticed a few granules tracked out of the box, but the tracking and scattering were no worse than we’ve seen with traditional clay litter.

Like so many other litters, Skoon claims that their litter is 99% dust-free. This might be true if you use the Skoon disposable litter box.

But it’s not true if you use a bag of Skoon and pour it into your litter box. When we poured the Skoon litter into the box, it emitted a large cloud of dust that lingered in the air for about a minute after pouring.

There’s no denying that Skoon is dusty. But the company says its dust isn’t as harmful as you might think.

Unlike clay litter dust, which is primarily composed of crystalline silica, Skoon’s dust is composed primarily of amorphous silica. Though there hasn’t been enough research to say that amorphous silica is harmless, it’s classified as nuisance dust and isn’t associated with silicosis or cancer.

How easy is it to maintain Skoon cat litter?

Thanks to its outstanding absorbency and odor control, Skoon cat litter was a cinch to maintain. All we had to do each day was remove the feces, which was desiccated and easy to pick out using the special Skoon litter scoop. After removing any feces, you give the litter a stir to make sure that urine was evenly distributed. If you use the disposable Skoon litter box, you can throw it out without creating any mess. Just fold over the sides of the box and discard it. Combined with Skoon’s subscription model, this is one of the easiest-to-maintain products on the market.

It depends on who you are.

While Skoon did well in almost every area, absorbency is where it surprised us.

Skoon cat litter soaked up urine faster and stayed dry longer than any other litter we’ve used. It was so absorbent that we couldn’t tell whether the cats were using it or not. This is both a good and a bad thing. If you can’t see how much your cat is urinating, you’re missing out on a vital part of monitoring his health. At the same time, we loved having an odorless litter box after not scooping out urine for a week.

On the negative side, Skoon is expensive.

Skoon charges $24.95 per 8-lb supply, which is enough for one cat for one month. Since we have two cats, it would cost us about $5o per month to use Skoon with our two cats. That’s not cheap—it might cost a quarter of that to fill our boxes with Tidy Cats. That said, if ease of use is your top priority and you’re willing to pay for it, Skoon could be a wise investment.

Overall, Skoon is a great option for people who wish they didn’t have a litter box in their house.

Its ease of maintenance, outstanding odor control, and convenient delivery make it a true set-it-and-forget-it litter.

Skoon offers a 30-day money-back guarantee, so you can give it a try risk-free.

Is Clay Litter Bad for Cats?

SuperZoo 2018: Observations and Trends From the Show Floor

Is Organic Catnip Better for Cats?

Is Marijuana Safe For Cats?