Sure, cats groom themselves – but that doesn’t mean humans can’t help out.

In a controlled indoor environment with balanced temperatures and artificial lighting, the normal shedding seasons are less pronounced, allowing cats to lightly shed all-year-round. All this loose hair has only two places to go – around the house or inside your cat’s body.

If you’ve ever found a cat hair in your acai bowl or tried to wear a black outfit, you’ll know that the first option isn’t ideal. And the second option isn’t fantastic, either. While cats normally pass their hair through their feces, they may also develop hairballs. Between the gagging and hacking and stepping in warm, wet tubes of cat hair on the floor, hairballs aren’t fun for anyone.

The best way to manage this cycle is to intervene before the hair has a chance to either deposit around the house or slip down your cat’s throat.

What are the benefits of grooming your cat?

Using a grooming glove or brush allows you to neatly gather up the hair and throw it away, sparing your furniture from a coating of hair and your cat’s body from uncomfortable hairballs. But it does more than just remove hair.

Grooming your cat has numerous other benefits:

Why use a grooming glove rather than a brush?

Grooming gloves are a great choice for cats who love being petted, but aren’t quite so comfortable being touched with a brush. They’re also a good choice for anyone with arthritis or other issues that make gripping a brush uncomfortable.

Disclosure: “Wildernesscat received this product for free in exchange for an honest review. Although the product was gratis, all opinions in this review remain my own and I was in no way influenced by the company.” 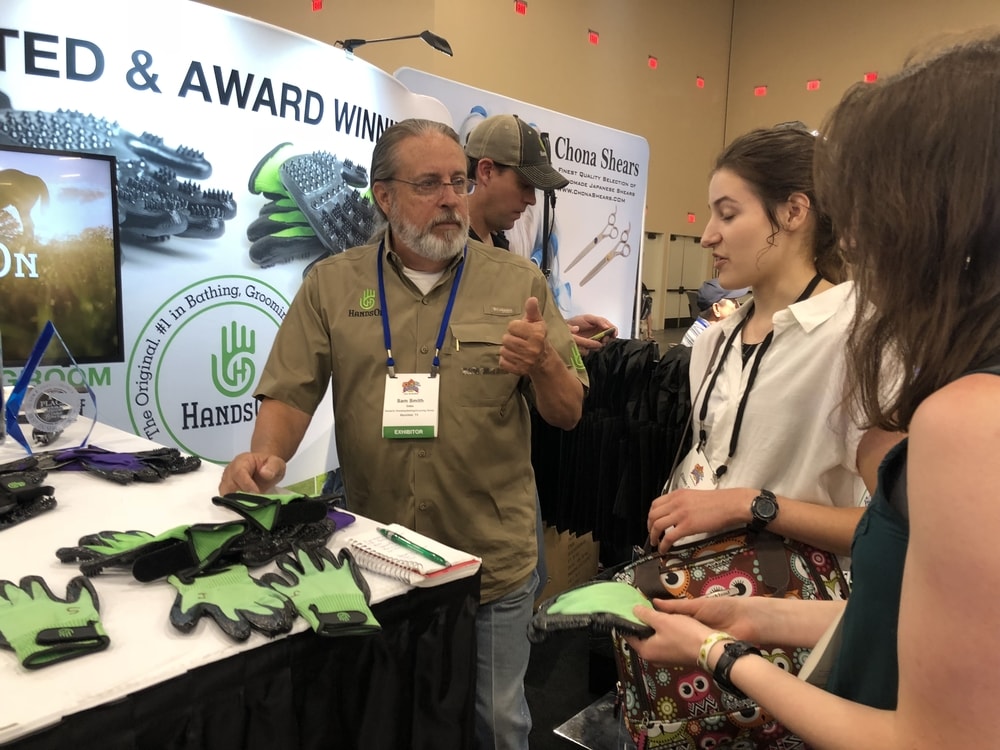 When Mr. Smith asked about our current grooming situation, I had to admit that the kitties don’t have a “real” cat brush at all – both Wessie and Forest enjoy the use of an old human brush.

That’s when Mr. Smith insisted that we take home a couple pairs of HandsOn gloves.

HandsOn gloves made their national debut in 2016, but their story dates back to the founder’s childhood. Jay grew up bathing and grooming horses and dogs, but never understood why his family insisted on using brushes that didn’t work that well. They used curry combs that were difficult to grip and didn’t conform to the contours of an animal’s body, bathing mitts that didn’t fit, and metal brushes that ripped through the hair.

After a career in film production, Jay returned to his animal-loving roots and started on a mission to create a grooming glove that actually worked. After four-and-a-half years of development, the HandsOn grooming glove finally hit the market.

HandsOn gloves are particularly popular among ranchers and horse people in general, but they’ve also developed a following among people with cats.

At first glance, the gloves look like ordinary garden gloves, made from a stretchy, breathable material. But when you turn them over, you’ll see that the fingers and palms are covered in nitrile nodules.

According to the company and their many reviews, these gloves are comfortable and effective, but are they really that great? Here’s our personal experience with these gloves.

Our Experience with HandsOn Grooming Gloves

One of the biggest problems faced by people choosing a grooming glove is the fact that most gloves and mitts just don’t fit that well.

Many are like oven mitts – oversized and not easy to manipulate. HandsOn gloves are available in 5 different sizes:

It’s a struggle for me to find gloves that fit, but the size small was neither too snug or loose, fitting, well, like a glove. The gloves feature a Velcro strap around the wrist, allowing you to fine-tune your fit.

The nodules on the fingers are longer than those on the palm. I found that the fingers picked up more loose hair and, compared to the palms, had a more significant de-shedding effect. The short, rounded nubs near the back of the glove are intended to massage.

After a 5-minute brushing session, both palms had amassed fuzzy mats of loose hair. With a flick of the wrist, the hair was in the trash.

Because you have full hand mobility while wearing the gloves, it’s easy to delicately groom those areas that are often hard to brush, like under your cat’s chin and around their eyes. This sets the gloves apart from both clunky mitts and standard brushes.

Using the HandsOn Gloves for Bathing

We also used the gloves to give Forest her first-ever bath. I felt that the nodules made it easier for me to grip Forest’s body while scrubbing deep into her coat and massaging her skin. There was plenty of loose hair coming out as we scrubbed, so I know we were thoroughly freshening up her coat.

Forest purred most of the time and only protested a little bit towards the end of the bath. If you were dealing with a more agitated cat, the gloves might help to protect your hands from their claws.

The gloves took several hours to dry, but were no worse for the wear.

What did the cats think of the HandsOn grooming gloves?

Considering that both Wessie and Forest love being brushed with an ordinary brush, it’s difficult to know if their reaction to the HandsOn glove was unusual. They pressed their heads into the gloves and raised up their tailbones to get a little extra pressure on the lower back, but that’s nothing new. What was unusual was something Wessie did during one grooming session with the HandsOn gloves. Though I had no intention of grooming his stomach, Wessie rolled over slightly and let me give a few strokes on the tummy.

So yes, I do think that he liked these gloves a smidge more than his old brush.

Where can I buy HandsOn grooming gloves?

HandsOn Grooming Gloves are available in retail locations in a few areas of the United States, directly through their site, on Chewy, and on Amazon.

Click the photo to check the current price on Amazon:

11 Tips to Keep Your Cat Cool in the Summer

Do I Need to Clean My Cat’s Teeth? Cat Teeth Cleaning is Important.

Is Your Cat Pregnant? What to Expect When Your Cat Is Expecting