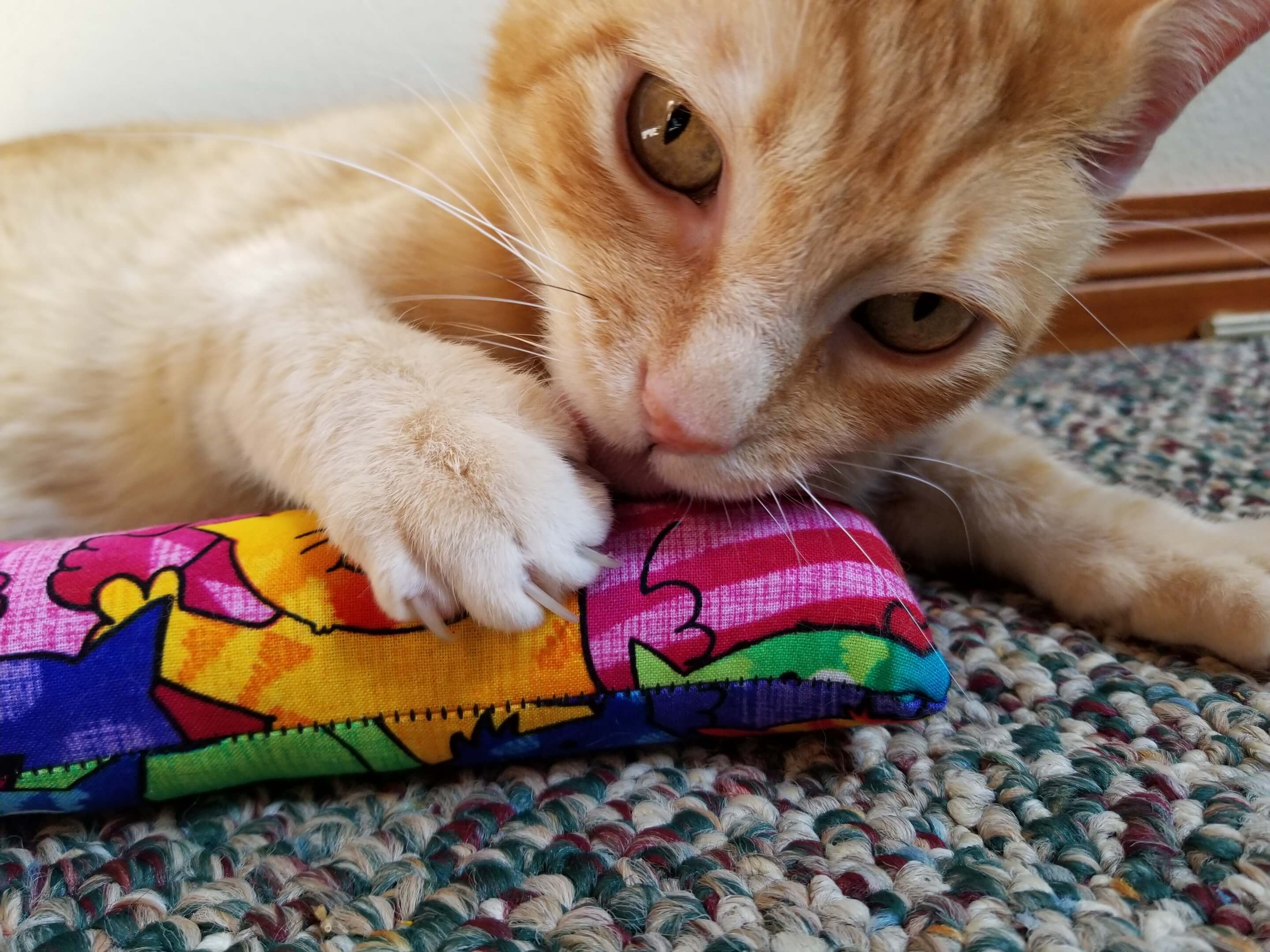 A cat kicker toy should be durable, affordable, and capable of making your cat into a bunny kicking beast. These toys are different from interactive cat toys that involve stalking and hunting behaviors. Instead, they’re independent play toys that stimulate your cat whether you’re at home or not. They’re usually filled with catnip to get your cat in a crazy mood. The best cat kicker toys have a soft, kick-able feel that mimics the sensation of prey or perhaps a feline adversary.

Since 2012, this family-owned business has been committed to creating “the softest, most durable, and cat-nipiest cat toy on the market”.

These toys are made to order in San Clemente, California. Once you order, the kicker toy craftspeople at KittyKickSticks have just 72 hours to hand-stuff the soft cotton material with fresh US-grown organic catnip.

Kitty Kick Stix Review—Is This the Best Cat Kicker Toy on the Market?

When I first got in touch with Mike at Kitty Kick Stix, I tried to imagine how our feline toy-testers (how’s that for a dream job?) would react to this kicker toy. Both of them are members of the 60% of the population that reacts to catnip, so I wasn’t concerned about that. It was the whole toy aspect of the Kitty Kick Stix that worried me.

Our 10-year-old orange tabby, Wessie, loves to play with everything besides store-bought toys. We learned early in his life that it was more financially responsible to crumple a ball of aluminum foil than to buy a catnip mouse from Walmart.

And 5-year-old Forest? Her origins are her namesake, and while you can take the cat out of the woods, you can’t take the woods out of the cat. After a youth spent killing bunnies, climbing 50 feet up in trees, and hanging out with skunks, deer, and probably a few bears, Forest must roll her eyes at the idea of batting at fake feathers stuck to the end of a wire.

Here’s what happened when the Kitty Kick Stix arrived.

Forest had zero interest in the new present, but Wessie’s catnip detection mechanisms were ringing alarm bells from the moment I opened up the envelope. Yeah, he knew there was ‘nip in there. In fact, human hands and opposable thumbs weren’t even needed to unwrap these babies. Wessie used his claws and jaws to rip in and get to the squishy, biteable goodness.

The Stix are tough, potent, and colorful with a built-in bell. Because the stuffing is so tightly-packed, the toy doesn’t jingle very much unless you make an effort to shake it.

Did the cats really kick the cat kicker toy?

The fact that this toy was called “Kitty Kick Stix” made me think that bunny kicking was the last thing the cats would ever do with it. Cynical, I know.

But, to my very pleasant surprise, the 15 inch Kitty Kick Stix is apparently the perfect size for a good curl up and kick.

This is a great example of natural feline behavior. Cats use their feet and rear claws to rapidly kick at an adversary’s most vulnerable area—their tummy. That’s exactly how they handle the Kitty Kick Stix. They grab it around the neck with their hands, bite its head, and kick kick kick at its lower body.

I kept the Kitty Kick Stix on the floor next to my desk for the duration of our testing. Every few days, I’d be working at the computer and look over to notice that Wessie “accidentally found” the stick and was whacked out of his mind, rolling around and doing that kicking thing as if he was a paid actor.

Forest also played with it a few times, but as usual, was more interested in other things.

It’s been about a month and a half since we got the Kitty Kick Stix, and yes—this cat kicker toy can take a kicking. And the catnip is just as strong as it was when we received the sticks. If you know your cat is a vicious beast when it comes to catnip toys, you may choose their “Clawtastically Strong” Stix. Under the “If it Rips, We Ship” guarantee, “if the Kitty Kick Stix rips, breaks, or comes apart, let us know and we’ll mail out a replacement.”

There’s a Kitty Kick Stix kicker toy for every cat.

You can choose from a variety of patterns and colors and select the size that works for your cat. From kittens to the big-and-tall set, just about every cat can find a Kitty Kick Stix kicker toy that’s just the right size for them.

Kitty Kick Stix has partnered with several rescue organizations and donates a percentage of each purchase to a rescue of your choice. So it’s a toy that’s both fun for your cat and kind to other felines.

And their customer service is awesome.

So this is a great cat kicker toy—by most accounts, it’s the best one on the market, offering superior durability, potency, and fun. And they support shelters. But those qualities aren’t what cinch the deal for us. Here’s what does.

The people at Kitty Kick Stix are really, really nice. As I read their website, I was mentally counting the ways this company exceeds expectations in the kindness department. They’re committed to being available to answer questions, provide refunds, send out new Kick Stix, and help out those who support them.

For example, according to their 72-hour guarantee, “if we do not ship it within 72 hours from the time you order, we will include a FREE 6″ mini-stix.”

How much do Kitty Kick Stix kicker toys cost?

Depending on which size you choose, Kitty Kick Stix range from $3.95 to $10.95 for a single Stix. If you’d prefer more than one, you can choose from a variety of high-value combo packs.

Where can you buy Kitty Kick Stix?

The company recommends that you purchase the Stix directly on their site to ensure that you don’t get a knock-off product and do have an excellent experience. Our readers get a special 15% discount on all orders. Just enter the coupon code “wildernesscat” at checkout to get your discount!

How to Stop Your Cat From Peeing on the Furniture

Cat Constipation Treatment: Remedies, Food, and When to See the Vet