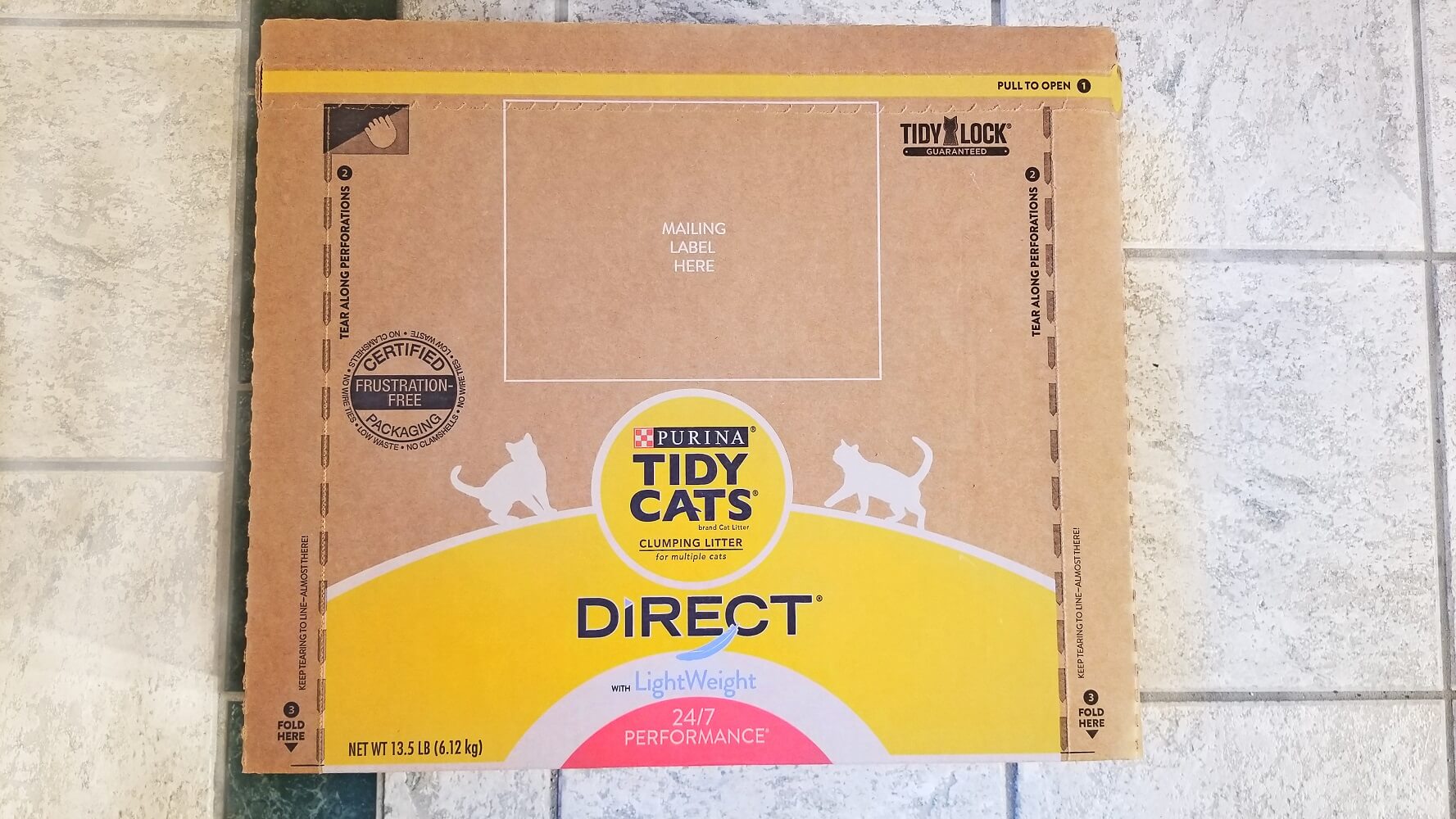 Check the Price on Amazon

Tired of scrubbing out the litter box? The Tidy Cats Direct Disposable Litter Box may be for you.

June was a fun month at Wildernesscat. We attended our first SuperZoo – SuperZoo is North America’s biggest trade show for pet retailers. This means we got to meet a lot of interesting people and innovators in the pet industry, and it was exciting to see so many new cat products in person. Want to hear more about Wildernesscat’s trip to SuperZoo? Read all about it here.

While the Wildernesscat human team was off at the show, Wessie and Forest were busy trying out the Tidy Cats Direct Disposable Litter Box. 💩

Whhhaaaa? A disposable litter box? Yep. You read that right.

The Tidy Cats Direct Disposable Litter Box is a pre-filled cardboard litter box intended for 30 days of use by one cat – and you can get it delivered right to your door. Talk about convenient!

But how does it work and is it a good choice? Let’s dive into our review.

Disclosure: “Wildernesscat received this product for free from Chewy.com in exchange for an honest review. Although the product was gratis, all opinions in this review remain my own and I was in no way influenced by the company.”

Why use a disposable litter box?

The Tidy Cats Direct Disposable Litter Box is all about convenience. If you hate scrubbing your cat’s litter box and are tempted to chuck it in the trash rather than give it a deep clean every month, you’ll probably love this disposable litter box. What makes it even better is the fact that you can get the litter box delivered right to your door every month. No need to ever make the journey beyond your doorstep. Unfortunately, Tidy Cats didn’t come up with a way to eliminate scooping from the chores – that’s still on you.

How much this use-and-toss litter box benefits you depends on how often you actually clean out and scrub the entire litter box, though. If you use a decent clumping litter, which is by far the most popular type of cat litter, deep cleaning is rarely necessary. If you scoop regularly, you can maintain the litter box indefinitely by simply topping off the litter when it starts to get low. A full dump-and-clean is only necessary when you use a non-clumping litter or when messes get solidly stuck on the sides or bottom of the box, a problem that you can avoid by choosing a good clumping litter, scooping frequently, and filling the box with enough litter to prevent liquid from ever reaching the bottom.

You need a separate litter box for a quarantined cat.

I think the disposable litter box is an excellent solution for people who foster cats, take in strays with unknown health conditions, or have a cat with a contagious disease who needs to be quarantined.

It’s a good idea to prevent sharing of dishes and litter boxes whenever you’re introducing a new cat to the household or if one of your cats is sick with a contagious disease. Here are a few of the illnesses cats can pass to one another through sharing a litter box:

If you use a disposable litter box, you can throw away the potentially infected box without feeling as wasteful as you would with a traditional box.

What kind of litter is the box filled with? 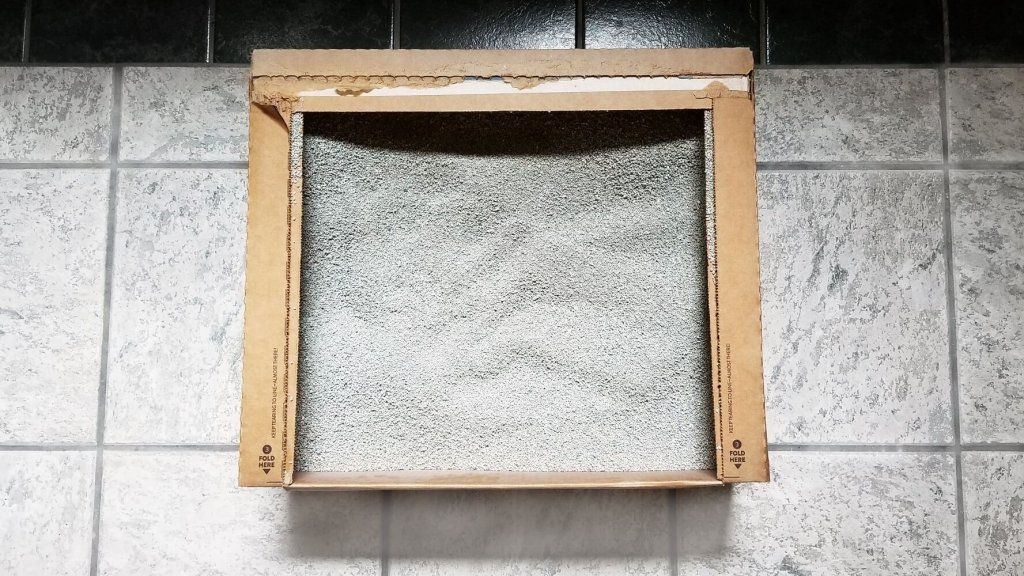 In 2013, Tidy Cats introduced a new lightweight litter – an answer to the numerous people who struggle to heft their heavy buckets of clay litter over the litter box. Tidy Cats Lightweight Litter is over 50% lighter than their traditional litters. That’s a huge weight savings. The excitement over this new litter soon turned to concern as claims came out that the litter was making cats sick – fatally sick in some cases.

Are these claims legitimate, and is the lightweight litter the cause of these cats’ illness? Maybe. While many people use Tidy Cats Lightweight Litter and have experienced no issues with it, the cats affected by the litter really did get sick. The problem lies in the dustiness of the Tidy Cats Lightweight Litter. The so-called low-dust lightweight formula is extremely dusty and high-tracking. One Amazon.com reviewer says it looks like they’re packaging cocaine in their basement, and that they have to wipe off their cats’ faces after every litter box use.

This dust can be dangerous when inhaled, causing respiratory issues, and can be a threat when consumed during grooming. Cats who like to play in the litter box, such as rambunctious kittens, are particularly at risk of developing respiratory problems from the dust.

For more information on the claims that Tidy Cats Lightweight Litter causes breathing problems, check out these links:

Unfortunately, the verdict is still out as to whether or not Tidy Cats Lightweight Litter is what made these cats sick. There simply isn’t definitive proof that the litter was the problem. That doesn’t mean you should ignore the claims, though. It’s not unheard of for a dangerous product to be in popular use for years before its dangers are realized by the majority – take asbestos for example.

If you do choose to try this litter, be careful and discontinue use immediately if you notice your cat showing any signs of respiratory distress: sneezing, coughing, or sniffling. I personally would not use the lightweight litter as my long-term litter, either.

The Tidy Cats Direct Disposable Litter Box arrived on our doorstep ready to be set up and used immediately. It’s self-contained in a box already, so there’s no extra packaging to deal with.

Looking for a litter box which can be a part of your decor? Try these instead:

The Tidy Cats Direct Disposable Litter Box is not just any cardboard box, though – you don’t need to worry about messes seeping through the box and onto the floor. The box features an anti-leak coating which contains your cat’s waste.

Was it easy to set up the box?

Yes. The instructions were very clearly printed on the side of the box. Tidy Cats claims the packaging is “frustration free” – and it was! The tear strips actually worked well, and the litter box was set up within a minute. 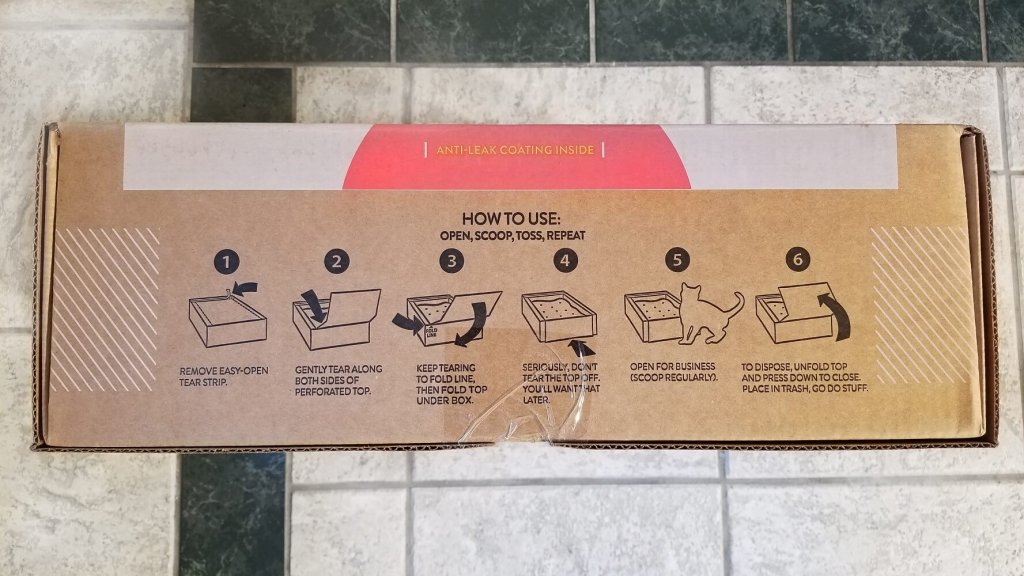 Tidy Cats recommends tucking the flap underneath the box during use and then folding it over the opening when you’re ready to dispose of the box.

How long did the litter box last?

Tidy Cats says the box should last for up to 30 days for one cat. Two cats were using the same box for the duration of the test period, and the litter lasted for 13 days. The length of time the litter box remains usable depends on your cat’s bodily functions and personal usage level.

The disposable litter box isn’t all that different from a conventional litter box other than that you throw it away when the litter runs out. We scooped the litter every day and tossed out the clumps. On the thirteenth day, there wasn’t any usable litter left, so we folded the top over the box and tossed it into the trash. Be aware that the box is bulky and would be hard to fit into a conventional trash can, so it should be brought straight to the dumpster.

What did the cats think?

In order to ensure the litter lasts without refilling for a full 30 days, the litter box was initially quite full. Wessie sunk up to his ankles in the deep litter and tossed it out of the litter box as he unearthed his paws.

Wessie and Forest both readily accepted the new litter box, though. If your cat is selective about their litter box, try incorporating a transitional period in which the new and old box are placed side by side rather than going cold turkey and risking any messes outside the box.

The lightweight litter used in the disposable litter box was regularly tossed outside of the box. The small, light granules often stuck to Wessie’s paws, meaning they got tracked around the house and we had to clean his paws so he didn’t consume the litter.

The Tidy Cats Direct Disposable Litter Box was a cardboard litter box filled with a lightweight litter I wouldn’t choose for myself. It did the job it was supposed to do well.

If you really hate cleaning the litter box or need a temporary litter box for a quarantined cat, this litter box may be the perfect solution. The box costs little more than the litter inside of it – running in the $23-$33 range from most stores.

For us, we’re still happy with our simple plastic boxes.

Where can I buy the Tidy Cats Direct Disposable Litter Box?

The Tidy Cats Direct Disposable Litter Box is available on Chewy.com, Amazon.com, and from Tidy Cats’ partner sites. Click the image to see what the price is on Amazon:

Is Prescription Cat Food Worth It? Probably Not.

How to Grow Organic Catnip at Home

Cat Panting – Is it Normal for Cats to Pant?

Homemade Raw Cat Food Made Easy With Wildernesscat: We’re on the Catexplorer Podcast