On the 24th of June, we packed up our bags, hugged Wessie and Forest goodbye, and left the meowntains of Northwestern Montana for Las Vegas, Nevada – we were ready to attend SuperZoo for the first time.

After about a year of planning, we were excited to be a part of the Zoo. This was our first opportunity to meet some people we’d been emailing for months, to discover new trends in the cat world, and to chat with representatives of new and fascinating companies with something to offer for cats.

When we arrived at SuperZoo on Tuesday morning, the show floor didn’t disappoint. With 10,057 people in attendance last year, SuperZoo is like a small city of pet people.

Imagine moving into a town where every business is a pet store, boutique, groomer, manufacturing facility, or provides a service related to the pet retail industry.

Dogs walk the streets, many of them dyed in all the colors of the rainbow or disguised as zebras, and on every corner, you’ll find a conversation about the future of cat guardianship or a debate on whether or not clumping clay litter is bad for kittens.

The crowd is diverse, including representatives of major companies like Purina, Blue Buffalo, and Hill’s, bootstrap business owners who didn’t buy a booth but came anyway, print journalists, celebrities like Rodney Habib and Karen Becker, and bloggers like us.

It’s at events like this where you can get the pulse of the pet retail industry. As we walked the massive show floor and talked with people, we noticed certain recurring themes.

Here are some takeaways from SuperZoo 2018:

We’re at the beginning of a pet CBD gold rush and a lot of people want a slice of the pie.

Both for humans and cats, CBD is really, really hot right now. On almost every aisle of SuperZoo, someone was displaying their CBD products for pets. Every one of them had a slightly different angle. We met some people who emphasized the fact that they source their hemp from their own farm and are able to control every step of the sourcing and manufacturing process, while another CBD company said that sourcing from highly-regulated Europe gave them an edge.

Some people said that full-spectrum hemp products were the only way to go. Others called that claim nonsense and said that isolates were equally effective.

Every CBD company representative described CBD as little short of panacea – able to help cats with anxiety and inflammation of every variety.

At this point, it’s hard to say which CBD products are the best for cats, but as the market becomes more established, we hope to evaluate the top products to determine which are the safest, most effective, and easiest to use.

Insect protein may be the next big thing in cat food.

We’ve been interested in the potential of insect protein for cats since I discovered Kasiks’ grub formula cat food. This Canadian pet food company recently introduced a grub cat food formula, but can’t sell it in the States due to the fact that America is (very) late to the insect-eating party.

We had the opportunity to chat with Paul Dahlby, a sales representative for Firstmate, early during our first day at SuperZoo.

Paul said that he’s excited about the potential of insect protein for pets. Compared to traditional protein sources used in cat food, insect protein has a very small environmental footprint. Cats naturally eat bugs in the wild, so from what we can tell, it is a biologically appropriate choice for felines.

But they currently can’t sell it in the United States. Americans still aren’t ready for insect protein for themselves or their pets. That fact was reiterated a few hours later when we attended a talk called Insect Protein 101.

Presented by Micah Kohles of Oxbow Animal Health in Omaha, Nebraska, this talk discussed the global significance of eating insects and the potential of this alternative protein source for pets. Micah talked about the fact that people around the world use insects as a major component of their diet. In America, insect protein isn’t accepted among the animals we call pets – only the ones thought of as “livestock”.

Micah explained the benefits of insect protein for chickens and swine, explaining that the studies done on these livestock animals demonstrate the potential of these little critters as food for our companion animals.

And later, while at the Petnet SmartFeeder 2.o launch party, we ate churro bites from a miniature cast iron skillet and chatted with Laura Colagrande and Haley Russell, two recent graduates of the University of Pennsylvania who were gearing up for the July 11th launch of Chipper Pet, their brand of cricket-based treats for dogs.

The #adventurecat revolution is on everyone’s radar.

A few years ago, any mention of something like the #adventurecat revolution would be met with confused facial expressions or maybe a faintly mean-spirited joke. Save for a few truly revolutionary people and cats, almost no one believed that cats could be trained and even fewer believed that they could take their cats out for adventures.

It was amazing to find that here at SuperZoo, almost everyone with whom we talked was aware of the #adventurecat revolution…and they loved it.

Because so many people have this revolution on their minds, I wouldn’t be surprised if more and more companies start incorporating it into their marketing slant. Expect to see adventurecat food, treats, collapsible bowls, and other merchandise targeted to this growing niche market.

The smelly side of cat guardianship is a business opportunity.

Human civilization is in a constant fight against stench, and the cat waste neutralization business is a great example of that. Expect to see more odor-fighting products on the market and more innovative types of cat litter appealing to the push for more natural products.

Cat litter is one of the most diverse products in the pet industry. Many different companies are capitalizing on the conscientious cat guardian’s interest in healthy, natural products.

This means that the market is full of alternative cat litter products. These non-traditional litter products are made from interesting substances like orange peel, recycled wood fibers, tofu, and green tea.

Some companies stick with clay but put their own unique twist on a staple product. Scooper Cat is made with a patented formula that stops ammonia formation. Kaka cat litter, currently only available in Europe, is made from high-quality cosmetic-grade bentonite clay and has an “attractive beige color”.

It can be hard for these companies to differentiate themselves. It’s unclear which qualities will effectively set a new cat litter company apart and guarantee its success.

The big companies display their might on the show floor.

For example, the Blue Buffalo “booth” was more like a small house, complete with an exterior facade, interior filled with displays, and two stories.

In the town of SuperZooville, these companies own the mansions on the hill.

Of course, the masters of the mansion weren’t in attendance. Instead, their employees were there, looking bored and distracted. They were probably thinking more about Fremont Street plans later that night than connecting with others or trying to figure out what the little upstarts in the industry are doing.

These slow-moving giants seem to think they’ll stay in business forever if they keep insisting that corn is good for cats and sponsoring veterinary colleges.

But can they survive when hundreds of other smaller companies are thinking on their feet, connecting with customers, and doing business in an innovative way that connects to the 21st-century pet parent?

At SuperZoo, the desire for change in the pet industry was a palpable force – just as it is on the web. People want change and these big players will either have to become a part of that change or go down with their outdated principles.

Another Highlight of the Event – Meeting Instagram Celebrities – Nala Cat and Manny!

We had the opportunity to meet with Nala, the most followed cat on Instagram – her Instagram page has 3.5 million followers!

Nala seemed tired after a long day of meeting the press and probably would have been happy to remain in the quiet of her little space pack, but her human opened up the side of the backpack and let us say hello.

Nala’s human was also nice enough to share some tips on growing your Instagram page – she says that it’s essential to use all of Instagram’s features, including live videos and stories. She added that it’s essential to post regularly, encourage your followers to comment by asking questions in your posts, and engage with those comments within 15 minutes. Thank you so much for the advice, Nala’s human! 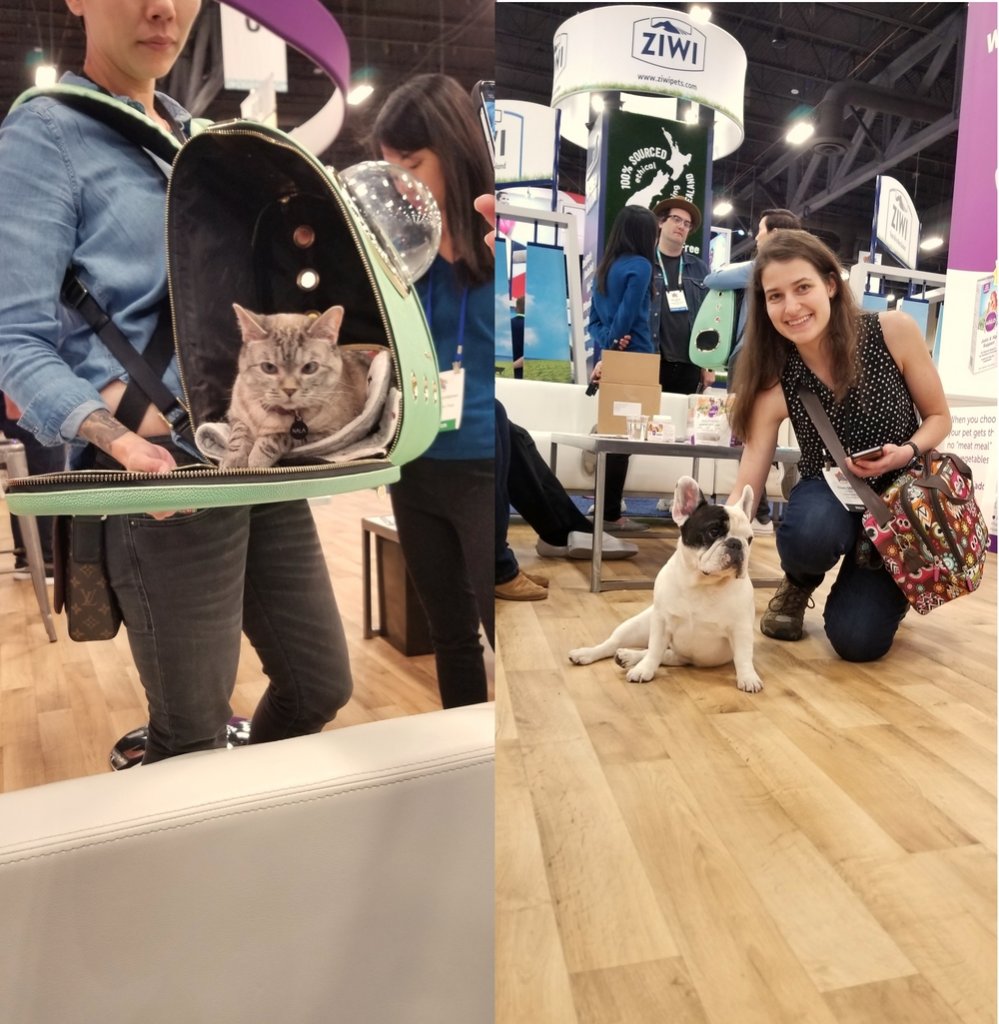 Although we’re obviously cat people, we were also happy to meet Manny the Frenchie, another famous Instagrammer. If you take a closer look at the picture on the right, you can see another person involved in the celebricat world – that’s none other than Ben Lashes, the meme manager who represents Grumpy Cat.

When we boarded the flight from Kalispell, Montana to Las Vegas, we had certain goals in mind. We wanted to meet with some of our contacts in the pet industry, discover awesome new products, and create relationships with new people. Between the New Product Showcase, a media tour, networking reception conversation, and walking around the massive show floor for hours, we’ve discovered many interesting cat products and will be reviewing them all in the coming months.

Traveling with Cats: Motion Sickness and How to Solve It

How to Stop Your Cat From Peeing Outside the Litter Box