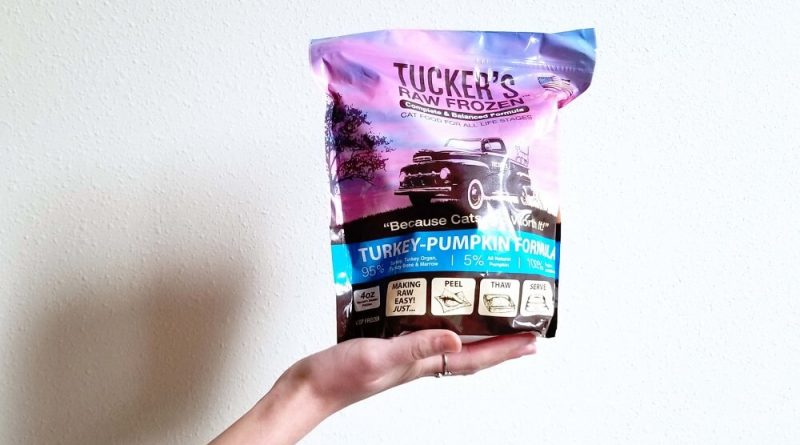 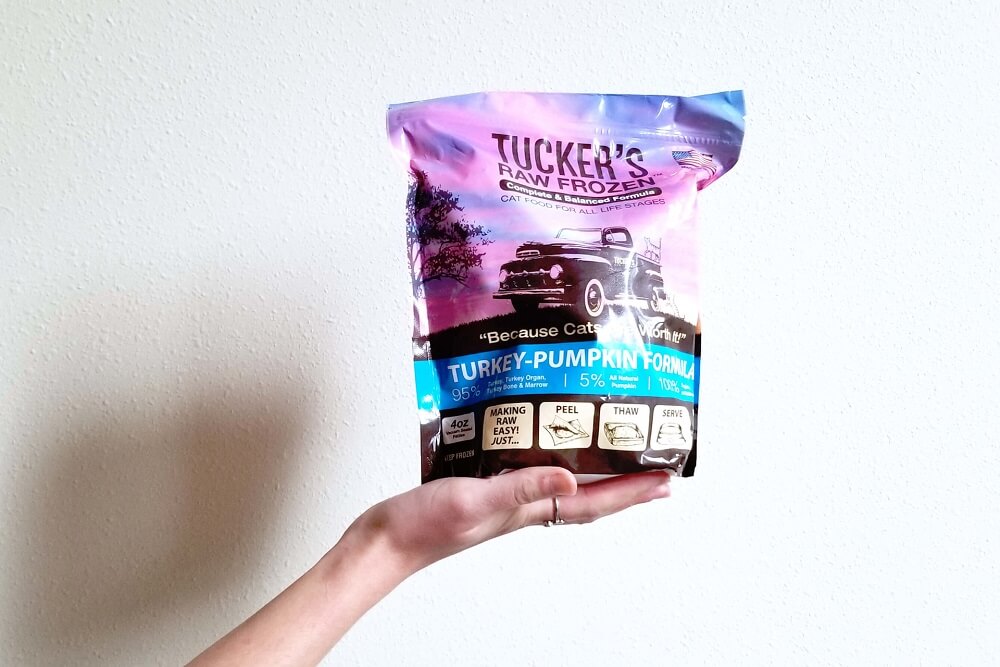 Tucker’s raw cat food may be the easiest and most convenient way to feed your cat frozen raw.

We’ve been feeding Wessie and Forest homemade raw cat food on and off for years, but it’s a challenge to stay consistent.

Even if—like us—you’ve found a great recipe that you trust, the organizational end of things can still be tricky. Between timing raw food prep to make sure you don’t run out, defrosting the food on time, and making sure that you have the right ingredients stocked in your freezer, making raw food has a logistical side that just might slip when other things take priority.

That’s why we liked Tucker’s raw cat food so much. Besides being just as healthy as—and maybe even better than—homemade raw food, Tucker’s has one of the most convenient, easy-to-handle formats of any raw food we’ve tried. The food thaws fast and, thanks to its quick-peel packaging, is easy to serve without making a mess.

Before we talk about what Wessie and Forest thought of Tucker’s raw cat food, let’s get some background on the company. We’ll discuss their sourcing and manufacturing, safety protocols, recall history, and what makes their products different. 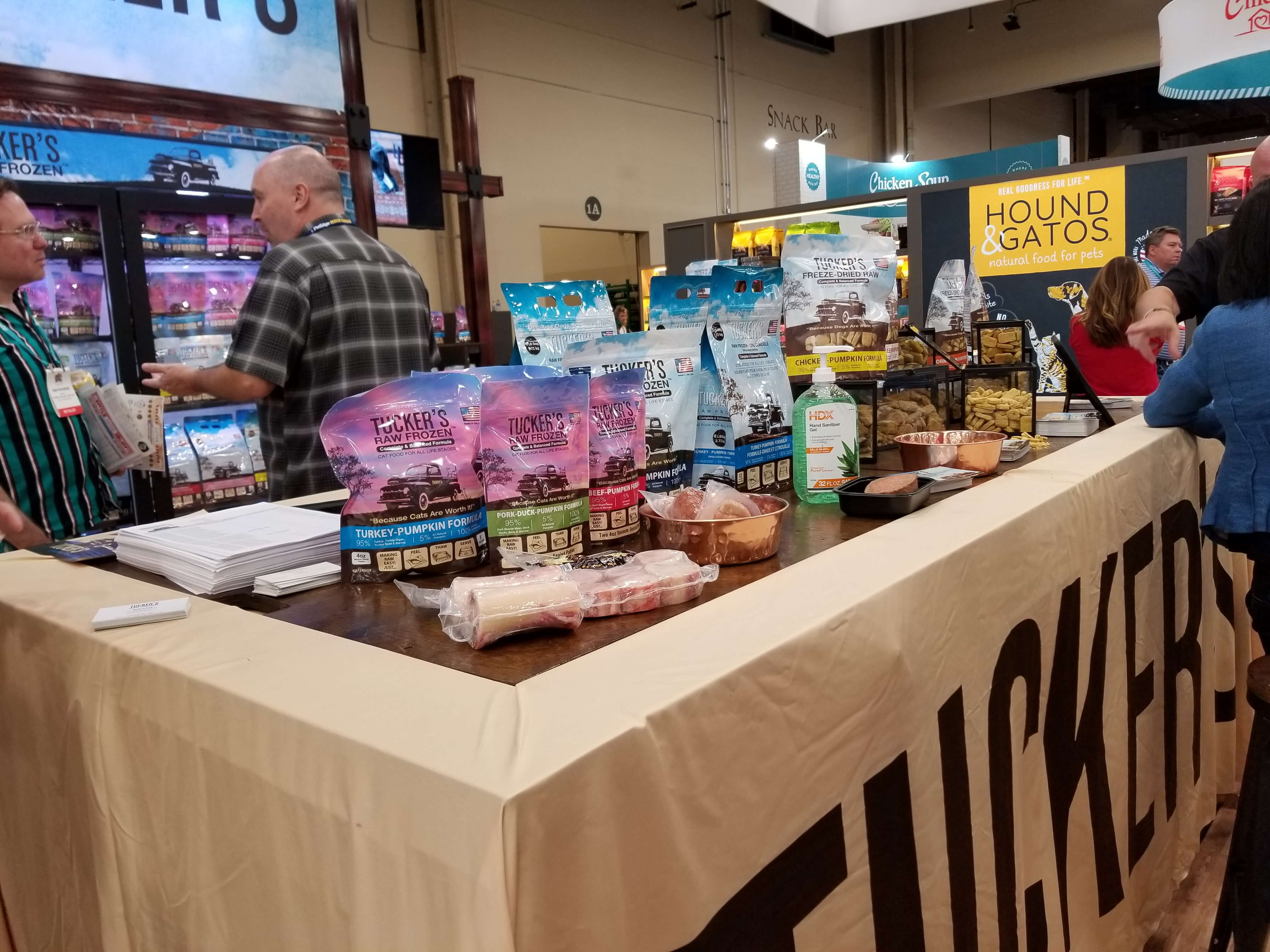 This Wisconsin-based company was founded in 2009 as a division of Raw Basics, LLC. The company manufactures and markets raw frozen bones, treats, and nutritionally-complete diets for dogs and cats.

Tucker’s raw cat food is made from proteins sourced in the United States and “many” of their other ingredients are also sourced from the United States. Like most companies, they appear to obtain supplements internationally. All of their formulas are manufactured in the company’s facility in southern Wisconsin.

This is a pasteurization process that destroys pathogens by subjecting them to frigid temperatures and high pressure. While it inactivates bacteria, viruses, mold, parasites, and yeasts, high-pressure processing leaves the food’s texture, taste, and nutritional value unchanged. It’s a good way to help ensure that the food is safe for both you and your cat.

While some other companies thaw and shape their food after high-pressure processing, Tucker’s raw cat food comes in the same vacuum-sealed plastic pouch it was HPP’ed in.

According to our research, Tucker’s raw pet food has been recalled once. In the spring of 2018, the company recalled 540 pounds of pork-bison dog food sold to distributors in Minnesota, Georgia, Kansas, and Pennsylvania. The recall came after the Nebraska Department of Agriculture tested the formula and it turned up positive for salmonella contamination.

As far as we could tell, no one reported any illnesses associated with this recall. 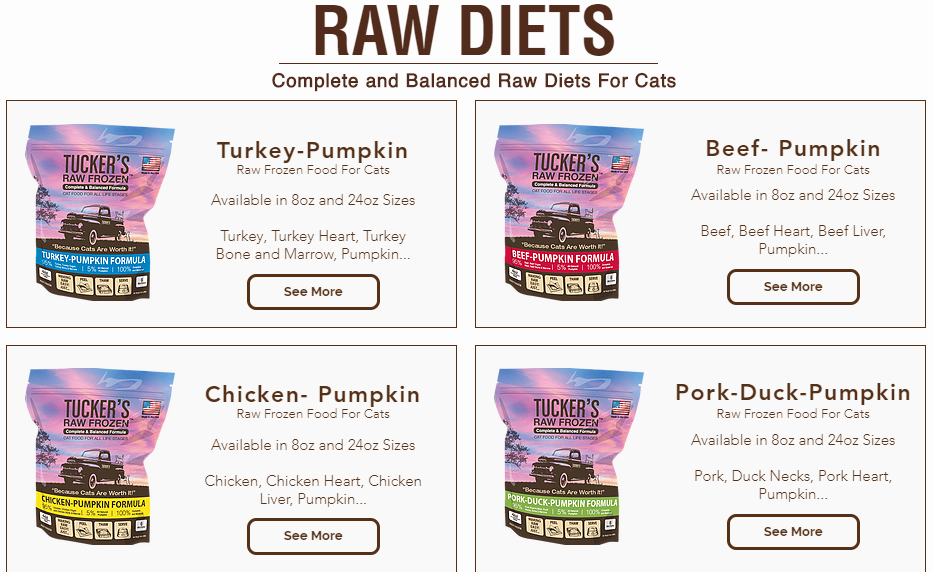 Regardless of protein sources, their recipes feature the same key ingredient types. Muscle meat is the first ingredient, followed by heart, bone and marrow, and, finally, there’s pumpkin.

This winter squash is a familiar constipation remedy, but should it be a primary ingredient in your cat’s daily diet?

At 5% of the food, the touch of pumpkin isn’t much more than the semi-digested plant matter you might find in your cat’s prey. Particularly with constipation so common among raw-fed kitties, a plop of pumpkin is going to do more good than harm.

To find out what Tucker’s raw cat food is like, we tried out a 24-ounce bag of their Turkey-Pumpkin recipe.

Disclosure: “Wildernesscat received Tucker’s raw cat food for free in exchange for an honest review. Although the product was gratis, all opinions in this review remain our own and we were in no way influenced by the company.”

We first found out about Tucker’s after getting an email from Matt, the brand’s VP of sales. He asked if we’d be interested in collaborating, so I checked out their site and did a little research. They looked like a solid company and we were up for it.

After a few months of emails and eventually meeting Matt at SuperZoo, we finally set up an influencer voucher and I went to Tailwaggers—shoutout to our favorite local pet specialty store—to pick up our sample of Tucker’s raw cat food.

Tucker’s raw cat food is available in either an 8-ounce or 24-ounce bag. 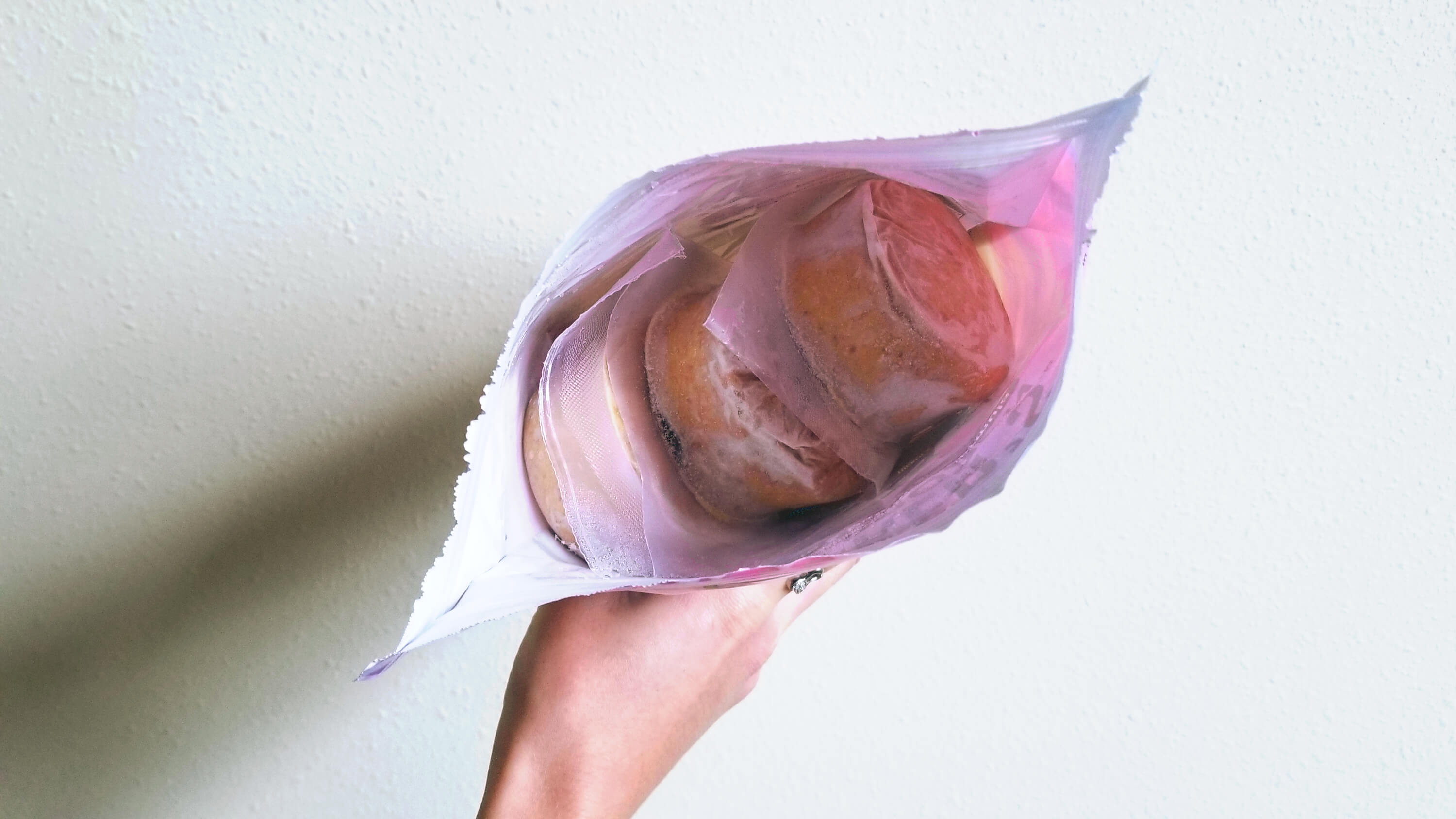 Inside are vacuum-sealed pouches of cat food. Each of these pucks is enough to feed a 10-lb cat for a day. Getting started with Tucker’s was easy. Just rip off the top of the bag, reach in, pull out a puck, and let it defrost.

The food defrosted quickly. After a night in the refrigerator, it was ready to serve.

Because it’s wrapped in thin plastic without a lot of insulation, it went straight into the fridge. No need to put it on a plate or fiddle with measuring cups. After a few hours, it softened up and was ready to serve.

I’m happy to say that this peel-top package is NOT the raw food equivalent of Sheba’s infamous peelable packaging. There was no struggle, no blood splashing on my hands, no food flying across the room. The package was easy to open and the food plopped cleanly into the bowl. 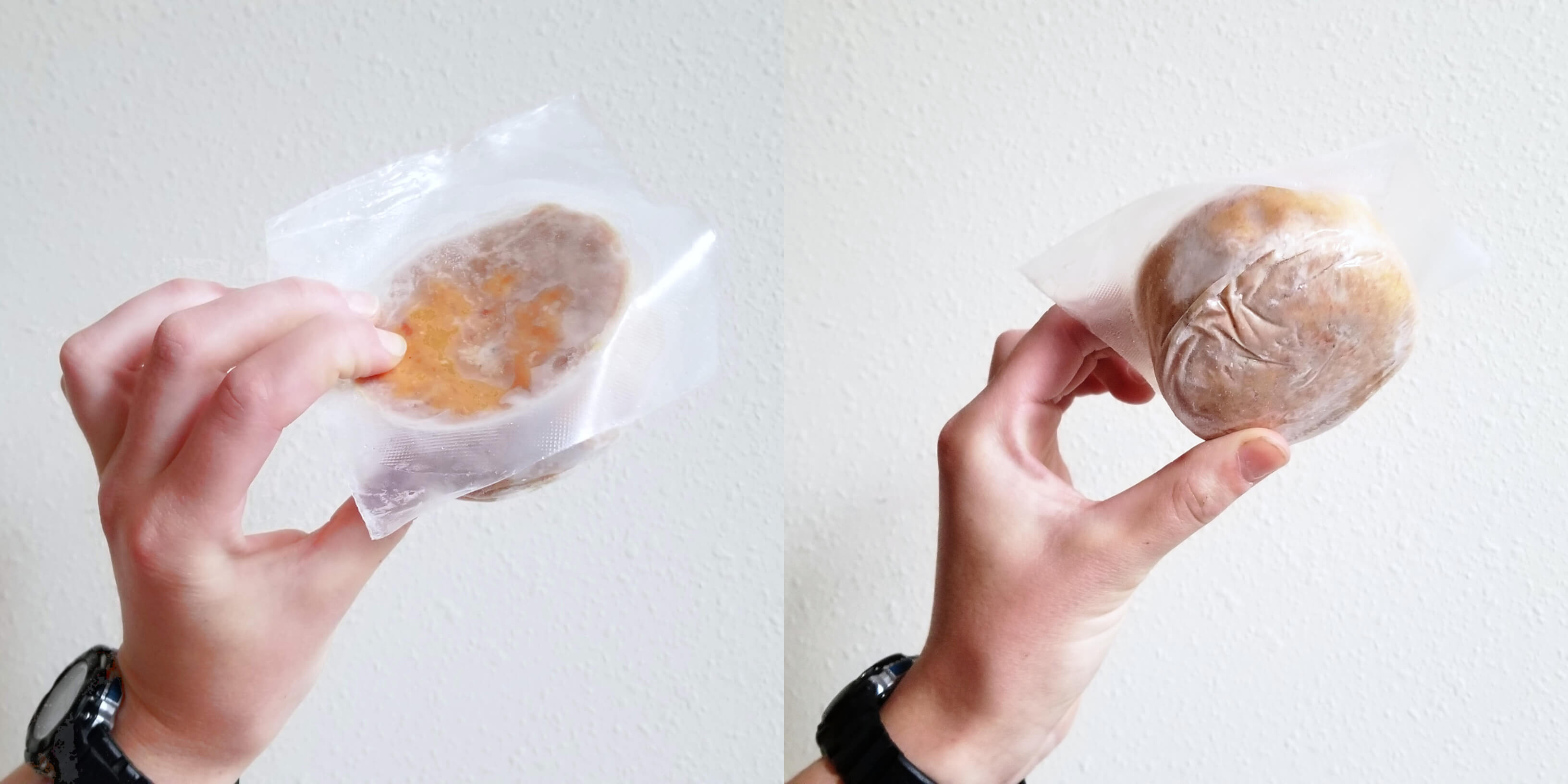 It has a meat-first ingredient list and, at 3% bone, isn’t loaded up with bone like so many other raw foods. Instead, its combination of turkey muscle meat, heart, and bone are indicative of a whole prey-inspired diet.

Curiously, this recipe doesn’t have any true organ meats. Though its nutritional properties are a bit different from other types of muscle meat, the heart is not an organ and doesn’t have the nutritional density of liver or other organ meats. If you want more organs, try their Beef-Pumpkin and Chicken-Pumpkin recipes, which both contain liver in addition to heart.

Though the food does contain pumpkin as a primary ingredient, it’s not a plant-based food in the least. If the guaranteed analysis is to be trusted, this food is right around 0% carbohydrate matter. That’s just the way we like it.

When you open up the pouch, the food has a fluffy, soft consistency and it smells like turkey. Cooked turkey. Isn’t that crazy? For a raw product, this stuff smelled delicious to my nose.

Both Wessie and Forest devoured their Tucker’s right away. Since our cats both eat varied diets and switch things up regularly, we didn’t bother with a slow transition and instead interspersed Tucker’s raw cat food with their homemade raw and canned food. After eating the Tucker’s, they frisked away and didn’t show any signs of discomfort or illness.

How much does Tucker’s raw cat food cost?

The price of Tucker’s raw cat food depends on where you buy it, but it’s generally a smidge cheaper than similar products.

In our article “Is Raw Cat Food Expensive?”, we found that the typical commercially-available raw cat food cost $5.30 per day. Similar freeze-dried foods were a little cheaper, but still pricey with any average daily feeding cost of $3.67 per day.

This makes Tucker’s raw cat food one of the most economical products of its kind.

Where can you buy Tucker’s raw cat food?

Tucker’s raw cat food isn’t sold online. It’s only available in brick-and-mortar stores. Use their store finder to locate a store near you. If you can’t find a retailer in your area, ask the store if they can make a special order.

Overall, we think that Tucker’s raw cat food is one of the best frozen raw foods on the market.

With recipes that emulate a whole prey diet, easy-to-handle packaging, and some of the lowest prices in the industry, Tucker’s appears to be both nutritionally sound and convenient.

A Quick Guide to Clicker Training Your Cat