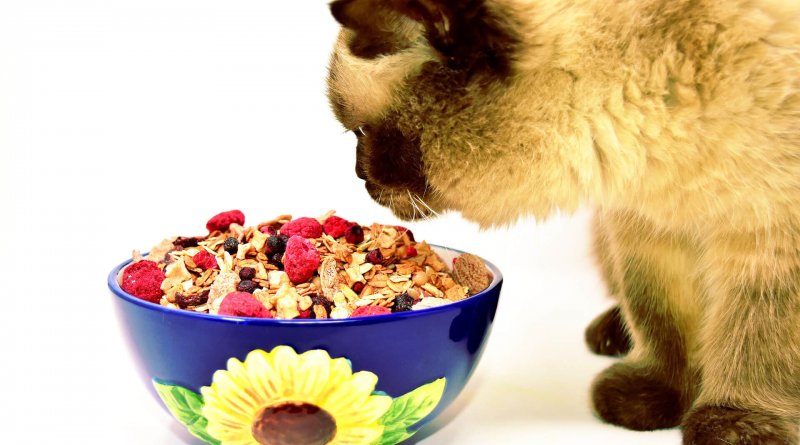 Most cat food is packed with fruit, vegetables, and grains in addition to meat. If pet food manufacturers are creating cat food with a mix of meat and plants, does that mean cats are omnivores? The short answer is no. Cats aren’t omnivores—they’re obligate carnivores and can thrive on nothing but muscle meat, organs, bones, and other parts of their prey. In this article, we’ll go into detail about why cats aren’t omnivores and why so many cat foods are formulated as if they are. After establishing the basis for a meat-based diet, we’ll discuss the types of food that honor cats’ carnivorous natures.

If you spend enough time wandering the cat food aisle, you might get the impression that cats are omnivores. Cat food packages boast of fresh and delicious carrots, green peas, and oooh brown rice—sounds like a delightfully balanced meal for an omnivorous kitty! Everyone knows vegetables are key to a healthy human diet, so it makes sense that cats need lots of veggies, too, right?

Though you might think vegetables are fresh and nutritious, cats don’t need vegetables to live and thrive.

Many meat-eating animals also eat fruits and vegetables and can survive off of them if necessary, for example, bears and dogs, while classified as carnivores, do not need meat to survive.

Not only will cats thrive on a diet of nothing but meat, organs, and bones—fresh, raw animals are the only food that is naturally full of the nutrients cats require. Anything else requires supplementation. A cat in the wild is likely to subsist entirely off of freshly caught prey, without any vegetable supplementation.

Let’s find out what makes cats’ bodies different and why animal carcasses are essential to their diets.

What is an obligate carnivore?

An obligate carnivore is a creature who cannot survive without consuming other animals. Physiologically, cats are made for meat consumption.

Their jaws move up and down, not side-to-side and are much more suited to ripping flesh than chewing greens.

Cats’ mouths are optimized for ripping at meat and chomping bones. In addition to powerful jaws with limited lateral movement, cats’ mouths don’t produce salivary amylase, an enzyme used to break down starches. Other animals, including omnivores, secrete this enzyme. Because cats naturally consume a low-starch diet, they don’t.

Their short digestive tracts quickly process raw meat and their gastric juices are extremely acidic, making cats less susceptible to the bacteria sometimes found in raw or even rotting meat.

Amino acids are the building blocks of proteins, but not all proteins are made 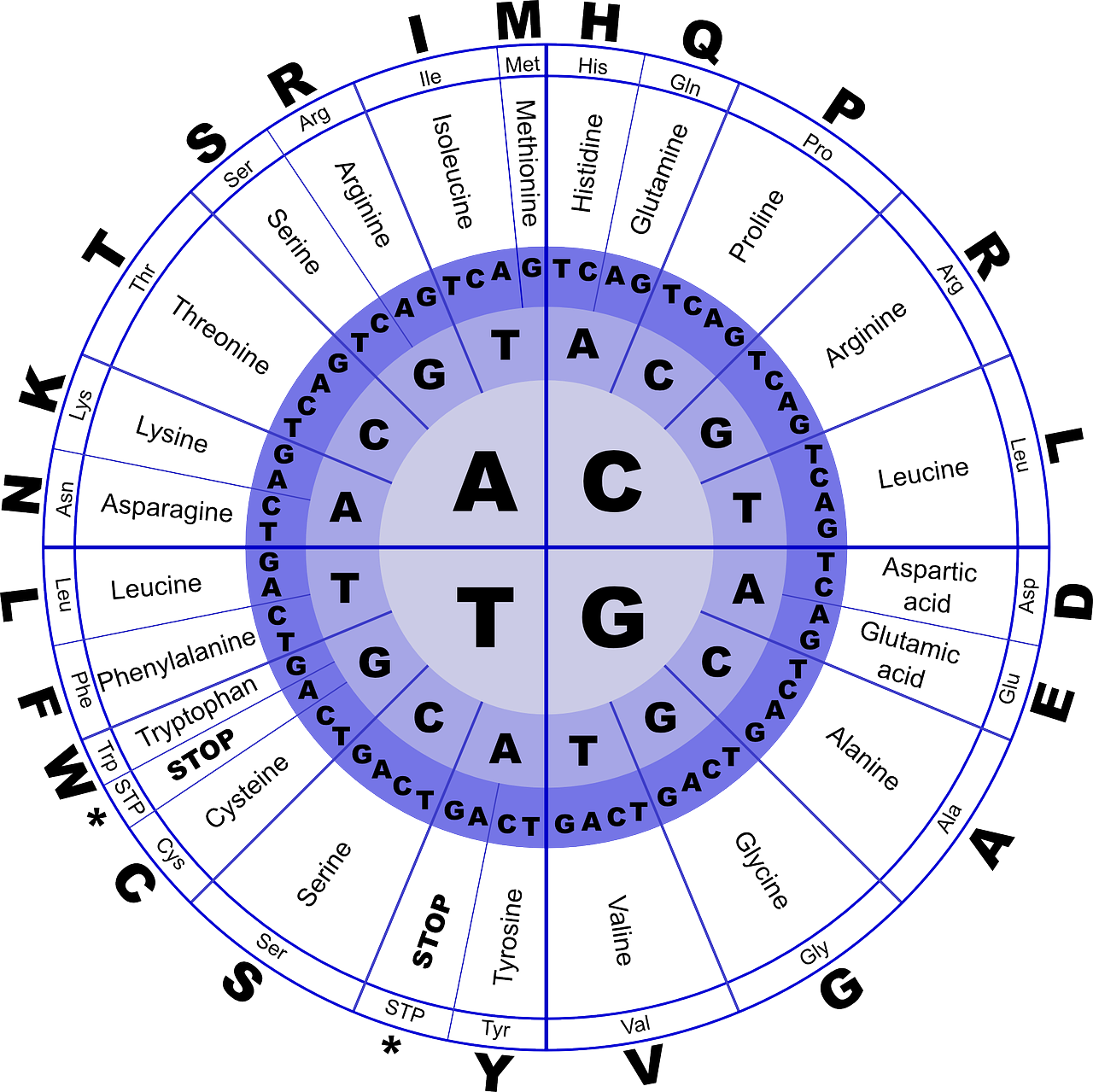 One of these amino acids, taurine, is an essential amino acid, which means cats cannot synthesize it and must consume it instead. Taurine is not naturally found in most plant proteins but is found in necessary amounts in animal protein. Chicken hearts, for example, are full of taurine. Taurine comes up a lot when you’re researching cat food. That’s because it’s so critical to your cat’s overall health. A taurine deficiency can negatively affect your cat’s cardiovascular system, eye health, and other vital functions.

Cats also require preformed Vitamin D, Vitamin A, and arachidonic acid. While humans can synthesize some of these vitamins from sunlight and other sources, cats must get them from animal-based food.

If cats are carnivores, why are so many cat foods filled with plants and vegetables?

Some people claim that the inclusion of plants in cat food is simply because plants are cheaper than animals. Plant protein is included simply as a cheap filler—boosting protein levels but not giving your cat the biologically-appropriate meal that they need.

Or, if you take Royal Canin’s word for it, it’s because corn is full of nutrients and corn starch—one of the most bioavailable and easily digestible carbohydrate sources around. Your cat will with then utilize these carbohydrates and translate them into a fast-acting energy source.

The truth probably falls somewhere between these two sides. Yes, plants are cheaper and easier to source than animals. Most cat food manufacturers want their products to be affordable for a wide market.

A cat’s natural diet is very high in protein and fat and low in carbohydrates. However, as far as I know, there isn’t anything saying that cats aren’t able to convert carbohydrates into energy. We prefer to avoid high-carbohydrate foods and stick with meat-based diets, but there may be no inherent harm in them. Remember also that grain-free doesn’t mean low-carb. Many grain-free cat foods are filled with potatoes and other starchy ingredients that bring up the carbohydrate levels. If you’re worried about grain or gluten as potential allergens, remember that the most common cat allergens are actually popular meat protein sources, such as chicken and fish.

So, cats are carnivores. But can they eat a plant-based diet with enough vitamin supplementation?

No cooked cat food is going to contain the same nutrients that raw meat does. All cooked and prepared raw cat foods contain supplements to ensure that the food is full of all the stuff naturally found in fresh whole prey carcasses. If all cat foods are fortified with vitamins and minerals, does it really make a difference if the food is originally meat-based?

The question begs another question. How much faith do you have in the human understanding of feline nutrition?

Sure, cats can survive on a diet made of a medley of supplements and people can live off of Soylent.

That doesn’t mean that your cat won’t miss out on some essential nutrient over time. This is why vegan cat food is such a hotly-debated topic. While a cat food made entirely of plants and supplements can technically support a cat, it’s debatable whether or not this food is really good for them or just enough to survive on.

However, we would prefer to feed our cats a diet as close to their natural diet as possible rather than make them a science experiment. Until more research is done on cat nutrition, we will feed our cats according to our radically natural preferences!

How do I choose a good cat food for my obligate carnivore? 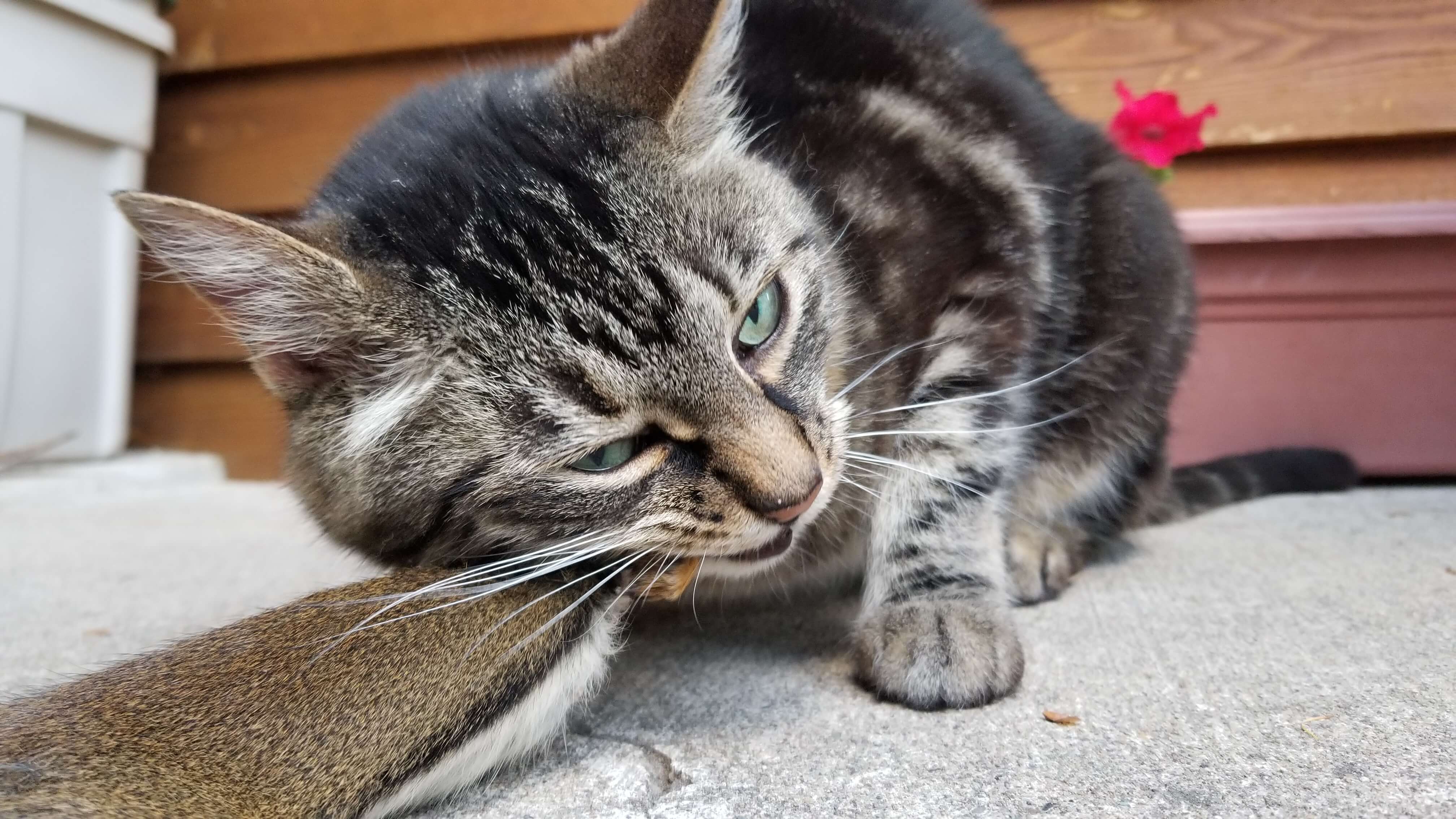 If you want to feed your cat the most species-appropriate diet possible, you’d be feeding your cat whole mice and birds. That’s not feasible or desirable for most of us.

The second closest diet would be raw food—a Frankenprey combination of meat, organs, bone, and a slurry of supplements to ensure complete nutrition. If you’re interested in learning how to make your own raw cat food, take a look at our 11 tips to making raw cat food easy and free printable raw cat food recipe PDF.

Should I add vegetables to my raw-fed cat’s diet?

This is an interesting question that raw-feeders are asking. We know plants and vegetables aren’t necessary for a cat’s survival—but does that mean they can’t be beneficial?

Some raw feeders describe how ultra-digestible their cat’s raw diet is. Their cat’s poop is hard, odorless, and their cat only goes once every other day. Perhaps that’s too digestible. Maybe this incredibly digestible, biologically-appropriate food fails to include something else that’s biologically appropriate—and may help keep wild cats regular.

When a cat eats a mouse, they don’t skin it and pick out the prime muscle meat and skip the other parts.

Most cats will eat a mouse whole. Our cat, Forest, skips the tails. Others skip the guts. In general, however, cats consume some indigestible matter along with the nourishing parts of their prey.

Fur, teeth, and any partially-fermented plant matter contained in the mouse’s stomach are all nondigestible. This natural roughage is a cat’s fiber and can keep the poop coming regularly. Take a look at this 2012 study on the effects of various animal tissues (including hard-to-digest skin, hair, and bone) on the feces and digestion of cheetahs.

If you think your raw-fed cat might not be getting enough fiber in their diet, try putting out a pot of cat grass. Many cats seem to enjoy nibbling on grass—and maybe, that’s their way of telling us that they’re not getting the fiber they need.

Cats aren’t omnivores. Instead, they are true or “obligate” carnivores. Their bodies are designed to consume and digest raw meat—and they can’t survive without it.

However, every commercially prepared cat food requires supplementation in order to provide your cat with the nutrients they need. While a food loaded with supplements can be nutritionally complete, we would be taking the entirety of feline nutrition and breaking it down into isolated nutrients. Species-appropriate cat food will be meat-based and contain low amounts of plant matter.

The Plantway – Can Cats be Vegan?

Everything You Need to Know About Dry Cat Food

Is Marijuana Safe For Cats?

How to Grow Organic Catnip at Home

PARTU BS-08 Air Purifier Review: Is this the best air purifier for cats?