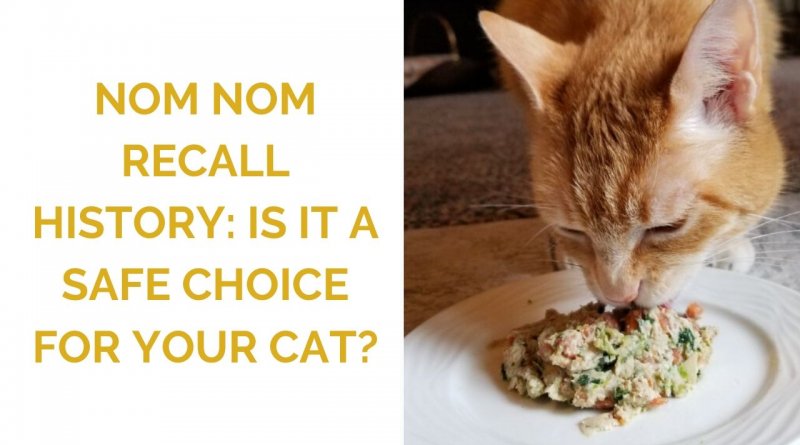 This article was previously posted under the title: NomNomNow Recall History: Is It a Safe Choice for Your Cat? NomNomNow pet food was rebranded as Nom Nom pet food in February 2020.

Nom Nom cat food comes in a convenient subscription package, has anecdotally improved cats’ health, and a lot of cats love the way it tastes. If you take a look at the company’s manufacturing standards, you’ll probably be impressed. But has it been recalled? Let’s take a closer look at Nom Nom’s recall and safety history to find out if it’s a safe choice for our cats.

This part of the page will be updated over time so you’ll have the information you need to make a safe food choice for your cat.

As of July 2019, neither Nom Nom’s cat food nor dog food has been recalled.

As far as we know now, Nom Nom cat food is a safe choice for cats. So far, there haven’t been any issues with Nom Nom making sure their food is fresh, free of contaminants, and nutritionally balanced. Some reviewers complain that the packages vary slightly in weight, but there are few complaints about Nom Nom’s quality control. We haven’t heard of any cats getting sick after eating the food.

What can a recall history tell you about a cat food?

No cat food is 100% safe. There’s always a chance that something could contaminate or damage a batch of cat food during the manufacturing process. Recalls can be frightening, but a recall doesn’t mean that a food is necessarily unsafe or that the company isn’t trustworthy. It’s important to look at both the cause of the recall and the company’s reaction to that recall.

A cat food recall can be spurred by mass negligence somewhere along the manufacturing chain—as in the widespread melamine contamination and subsequent recall of over 5,000 pet food products in 2007. A stricter focus on responsible sourcing and increased product testing may have prevented the illness and deaths caused by melamine contamination.

On the other hand, some companies might issue a recall for something a lot less dangerous just in an abundance of caution. Take a look at this recall from Primal, in which they recalled a few batches of pet food made with less than optimally-sized ground bone fragments. The bone fragments weren’t necessarily dangerous for pets, but they didn’t meet Primal’s standards.

Recalls can bring out the best and worst of a company. You can use a company’s reaction to a recall to judge the company’s integrity and help you determine whether or not the food is a good choice for your cat.

Look for transparency and immediate action to correct any issues that led to the recall. Bonus points to companies like Primal, who recall foods that don’t meet their specific product standards. If a company tries to hide a recall or tries to shift blame, it’s hard to believe that they’re honest about everything else in their cat food.

What is Nom Nom doing to make sure their food is safe?

Nom Nom is a newcomer to the pet food market—they released their dog food in 2015 and cat food in 2018—so they don’t have a long history to back up the safety of their foods yet. Instead, it’s up to us as consumers to look at the facts and experiences of other real Nom Nom customers to determine whether or not it’s a good choice.

Here’s what Nom Nom is doing to ensure that their products stay safe for pets:

We first tried Nom Nom cat food when it was made available to the public in 2018.

Our cats loved it and we liked most of the ingredient list and food’s convenience. If you’re interested in a full review of Nom Nom cat food and history of the brand, take a look at our Nom Nom cat food review.

Other blogger reviews are also primarily positive, but these reviews, unfortunately, are not the reviews of real, longterm Nom Nom customers. Most of the blog reviews you see are from people who fed their cats Nom Nom for a limited period of test time. Because Nom Nom pet food is only sold through their website, we aren’t able to find the unbiased reviews that many people leave for other cat foods on websites like Amazon.com. That’s why we headed over their ConsumerAffairs page to find out what actual customers are saying.

What do real customer reviewers say about Nom Nom?

Nom Nom is an accredited brand on ConsumerAffairs, which means they pay ConsumerAffairs to be able to communicate with the consumers leaving reviews. This paid affiliation may lead to unfairly positive reviews and could invalidate the reviews on the site.

Most of the reviews on the website were from people who feed their dogs Nom Nom, while only a few reviewers mentioned the cat food. Several people who reviewed the cat food said their cats’ coats looked better after eating the food. One reviewer left a 5-star review but said their cat didn’t like the taste of Nom Nom. The few negative reviews that Nom Nom received were mostly related to slight differences in the amount of food in the packages and messy package design. A few people expressed that their dogs had gotten sick after switching to Nom Nom food, but it was unclear whether or not the illnesses were related to the food change at all. I didn’t see any mentions of cats getting sick after eating Nom Nom.

Overall, Nom Nom has been well-received by cat and dog guardians alike. Most reviews are positive and Nom Nom appears to be a safe and nutritious food choice.

If you are interested in trying Nom Nom cat food, you can get 50% off your first order by purchasing through our link below. We’ll receive a commission from the sale which will allow us to continue producing content like this article. Thank you!

Let us know if you’ve tried Nom Nom cat or dog food, and what you thought of it! We’d love to know the good and the bad—our cats’ health and safety is our primary concern, and your experiences will help other cat guardians make their own decision.

Is Organic Catnip Better for Cats?

Debunked: The Myth of Dry Cat Food for Dental Health

The Truth About Raw Cat Food and Constipation