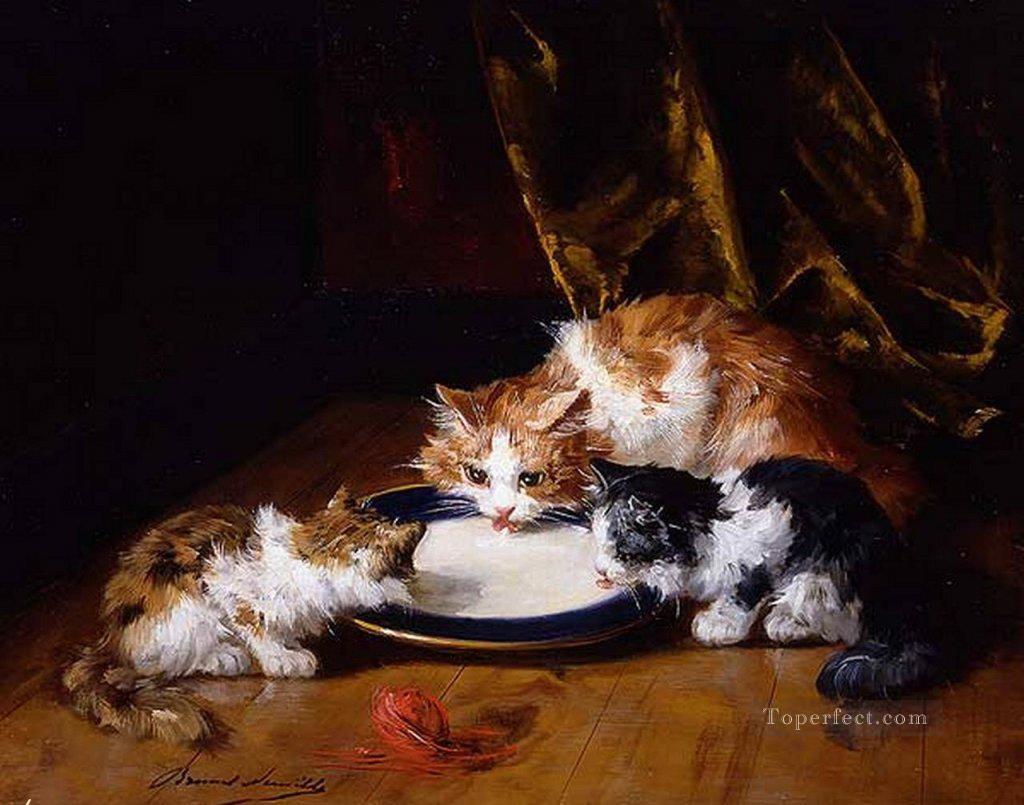 If most cats are lactose intolerant and milk gives them diarrhea, why the trope of a cat with a saucer of milk?

It’s an image that’s probably ingrained in your mind – a kitten, probably with a bow around its neck, lapping up a saucer of milk – the perfect image of tranquility, the quintessence of home. Historically, we’ve always put cats and milk together – despite the fact that most cats are lactose intolerant.

As a reminder, here are a few examples of how cats and milk go together.

Well-known 19th-century animal and still-life artist Alfred Arthur Brunel de Neuville seldom showed cats more than a few feet away from a bowl of milk. As the leading animal artist of the Paris school, Mr. de Neuville likely influenced other would-be cat painters, who would catch on to the cuteness value of kittens clustered around a bowl of milk. 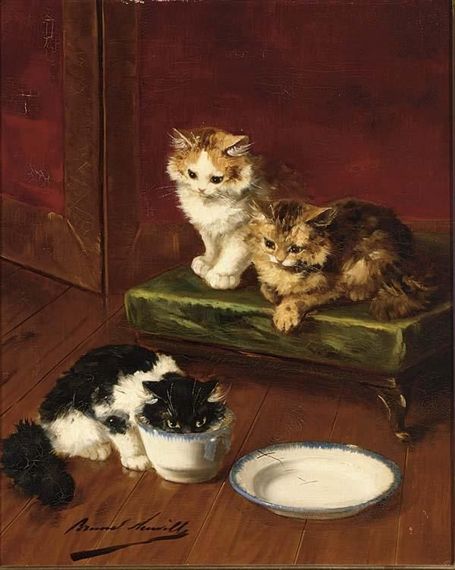 Even Disney knows that milk and cats are a purrfect match.

Dogs like milk, too – but they’re seldom depicted in artwork with their tongues dunked into a saucer of milk. I searched for “Victorian dog paintings” on Google, and came up with the following…

Kittens. With a bowl of milk.

According to experts, most cats are lactose intolerant because they don’t produce lactase, an enzyme that plays a key role in digesting lactose. Anyone involved in kitten breeding or rescue work would tell you that those kittens should have nothing to do with a bowl of milk – their lactose intolerance could lead to diarrhea, and, as a consequence, life-threatening dehydration.

This conflict made us curious.

If most cats can’t drink milk without getting sick, why have they been historically associated with doing so? Didn’t people of the past recognize that milk gave their kittens diarrhea? And why were the cats drinking milk in the first place?

As our search for answers began, things didn’t look promising.

There was the standard WebMD article – which acknowledged that “in children’s stories, it always seems to be a match made in heaven. Who hasn’t seen adorable illustrations of a kitten lapping at a saucer full of cream?”.

The article went on to explain that like all mammals, cats are born with the ability to produce lactase, but gradually produce less of it when they’re weaned. They offered the standard recommendation of giving your cat a small amount, waiting for symptoms, and moving on from there. Low-or-no-lactose alternatives, like yogurt and some cheese, were recommended.

But still, nothing answering the question of the ubiquitous cream-lapping cat.

Then I stumbled across a thread on the Explain Like I’m Five subreddit.

“If cats are lactose-intolerant, how did we come to the belief that giving cats milk = good? Or asked differently; how is it that cats (seemingly) enjoy – to the level of demanding it – milk?”

Now that IS the question, isn’t it, OP?

First of all, we know that cats, like everyone else, sometimes enjoy things that aren’t necessarily good for them. Wessie likes eating clementines and watermelon, but we’d never consider them an appropriate diet staple. Milk falls into the category of foods that won’t work as a complete diet, but which aren’t terrible for your cat to eat in moderation.

Some speculated that because throughout history, most cats have lived outdoors and earned their keep by killing mice, and because they were particularly popular among farmers, these cats grew up drinking fresh cow’s or goat’s milk on the farm.

There’s an interesting point – cats have historically been furry farmhands, working pest control in the barn and receiving leftovers and scraps associated with farm life. Saucers of milk exist in abundance on a cow-inclusive farm.

And the milk was raw.

Louis Pasteur didn’t develop his method of low-heat processing until 1864, and milk pasteurization didn’t become widespread until the late 1800’s. Many of the cats in artists’ representations lived with cows or goats and weren’t drinking commercially-sold milk anyway.

Because the milk wasn’t pasteurized, lactase was naturally present in it. This enzyme took care of the digestive work that most cats’ bodies can’t do on their own.

Maybe those Victorian cat guardians weren’t stupid or cruel – maybe things were just different back then.

Sure, most cats of the era lived outdoors. Most explosive diarrhea resulting from a sip at the milk saucer would have happened in the garden, far from human eyes. But maybe there wasn’t any diarrhea or GI distress whatsoever – unpasteurized raw milk may have made cats of the past “immune” to the lactose intolerance found in cats today.

So can cats drink milk – and should they?

These speculations about the prevalence of the kittens and a saucer of milk trope gave us some important insights into the feline relationship with dairy.

Because most cats lose the ability to digest lactose beyond kittenhood, drinking pasteurized cow’s milk will cause them gastrointestinal distress. Without the lactase enzyme, milk sugars will build up in your cat’s GI tract, leading to diarrhea, pain, and sometimes vomiting.

If your cat never fails to round the corner when you pour a glass of milk, there’s nothing wrong with giving them a couple of spoonfuls of this dairy treat. If you want to err on the side of caution, make up for lactose intolerance by choosing low-or-no-lactose milk.

Raw milk, milk formulated for lactose intolerant people, and low-lactose milk products are safe for your cat to consume. Low-lactose dairy products like parmesan, cheddar, and swiss cheese, along with yogurt, sour cream, and cream cheese, are all safe snacks for your cat.

For kittens young enough to still drink their mother’s milk, drinking another animal’s milk alone will lead to malnutrition.

If your kitten is under four weeks old, they need their mother’s milk or a properly formulated kitten milk replacer. No other milk has the delicate nutrient balance that your wee kitten requires.

If your cat demands a milky treat, there are a few ways to safely provide the dairy goodness they crave.

Unpasteurized milk retains its natural enzymes, including lactase – the enzyme required to break down lactose. This means that it’s safe for lactose-intolerant cats to drink. While unpasteurized milk comes with the potential to make humans sick from E.Coli and Salmonella – along with other pathogens – these are of little concern for cats.

In addition to lactase to make it safe for your cat’s digestion, raw milk contains beneficial probiotic and prebiotic organisms, helping to bolster your kitty’s digestive and immune health.

There are a few products on the market that have been specially formulated for cats, helping to ensure that cats can enjoy the taste of milk without suffering the consequences. If your cat loves drinking milk and you love giving it to them, you might try one of these “cat milk” products.

Here are a few popular ones with our reviews.

Fundamentally, this is just low-fat milk with the addition of the lactose sugar eating enzyme, lactase. The inclusion of lactase makes up for your cat’s inability to secrete the enzyme on their own. Cat-Sip milk also contains a minimum of .005% taurine, which is an amino acid necessary for your cat’s health.

We haven’t heard of this kitty milk formula making cats sick and the simple ingredient list makes it an appropriate treat. There’s not much to criticize about this milk.

Breezy P, an Influenster reviewer from Las Vegas, Nevada notes that “if you don’t use it within a few days of opening it, the spout gets all crusty and the milk at the bottom of the carton gets thick.”

When you see Whiska’s on the label, you know it’s got to be bad. Instead of keeping it simple like Cat-Sip did, Whiska’s couldn’t help making things ugly with a list of non-specific ingredients and unnecessary additives.

According to the Whiska’s website, this catmilk contains: Milk and Milk Derivatives, Derivatives of Vegetable Origin, Various Sugars.

The inclusion of sugars, which cats don’t need, and the lack of ingredient transparency makes us disinclined to recommend Whiska’s Catmilk.

A kitten rescue and fostering mainstay, KMR provides all the nutrients that your growing kitten requires. Mix this powder with warm water and you’re ready to give kittens appropriate nutrition. Ordinary milk is no substitute for mama’s milk – but KMR is.

2 thoughts on “Can Cats Drink Milk? Why Victorian Cats Were Always Lapping up a Saucer of Milk”

How to Make Your Apartment Cat-Friendly

Moving Into a New Home? Help Your Cat Adjust With These Tips

Traveling with Cats: Motion Sickness and How to Solve It